Truck driving in the U.S. is not for everyone. You may have to stay away from your family for weeks, even months on wend. Plus, the lifestyle is not exactly very healthy. You may find yourself sitting for many hours without a break and the food you get on the road is not likely to be the most healthy. 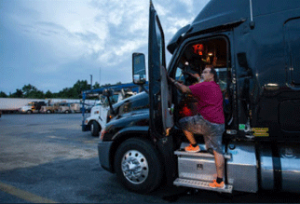 Even more serious is the fact that the most dangerous thing about truck driving in the U.S.A is that it the one of the most hazardous job in the country. According to the official records, a large number of people die from highway accidents.

The number of truck drivers that are fatally injured while working is quite high compared to most other industries.

While the incidences of fatal injuries among truck drivers has reduced in recent years, thanks to great work done by the American Truckers Association, the fact remains this number is still high.

The American Truckers Association (or ATA for short) has worked extremely hard to make our highways safer places. While many people think that unsafe trucks coming from Mexico will increase the rate of fatal accidents among truck drivers, the chairman of this association states that this is not so. All trucks from Mexico that operate in the U.S.A need to abide by U.S. regulations and standards.

With that said, given the fact that truck driving is still significantly more dangerous than many other jobs, there’s a huge shortage of truck drivers in the country.

Several famous U.S. truck companies have increased their driver pay by a considerable percentage this year, which in and of itself is a testament to how serious the shortage is. Some other companies, on the other hand, are offering large bonuses to attract truck drivers.

While the shortage is not good news for big truck companies, it is extremely beneficial for skilled truck drivers as well as for people who want to become a truck driver.

Because of the shortage, skilled truck drivers are getting paid more than before. If you are planning to make truck driving your career you are likely to get better pay now because most truck companies are finding it hard to get enough people for the job.

That said, the pay of a new truck driver is considerably lower than of an experienced truck driver. Also you are likely to get the less-popular jobs/ routes.

However, if you can stick it out you can earn a decent living and one which is becoming safer every year.